Vyper is a contract-based approach to writing Ethereum smart contracts and is aimed at bringing “increased security and readability through a minimalist approach” to the smart contract landscape.

Although Vyper has gained some popularity in recent times as a security-focused alternative to Solidity, the simplicity required for such a case leaves out some features of Solidity that developers have come to appreciate.

In its current form, Vyper is python-based, but due to the Consensys audit highlighting some major security flaws, the Ethereum Foundation has decided to concurrently build a Rust-based Vyper, while community devs aim to support the original Python-based version.

Because of the inherent security flaws, please do not use Python-based Vyper in production projects until the vyperlang team has created a production-ready release. Embark will also support Rust-based Vyper once it is released.

Irrespective of the security audit, Vyper is perhaps the most intuitive and easiest to quickly learn language for reading and writing Etheruem contracts - even without any prior knowledge or experience in programming. Additionally, Embark has created a plugin that makes it just as easy to compile Vyper contracts in an Embark ÐApp!

Let’s see just how easy this is!

Before we can write our first Vyper contract, let’s take care of a few requirements.

The rest of this article will assume you have Embark installed globally, and therefore available from the CLI.

If you haven’t already done so, make sure to install Vyper. As the documentation recommends, be sure to use a Python virtual environment when installing Vyper, as it will keep your system-wide packages from being polluted.

For this article, we will be creating a demo ÐApp to use as a base for creating our first Vyper contract. However, if you already have a ÐApp that you’d like to add Vyper contracts to, simply skip this step.

Installing the Embark Vyper plugin in our ÐApp is extremely simple:

Step 4. Add a Vyper contract to your ÐApp

First, let’s delete the SimpleStorage Solidity contract that comes with the Embark Demo by default:

Next, let’s create a Vyper contract in the contracts folder of our ÐApp, ie contract/SimpleStorage.vy (case is important):

The function of this contract is simple: upon creation (deployment), it will store the value we initially give it during deployment. We also have access to a set() that will allow to set the value stored in the contract.

Because Vyper’s constructor is called __init__, Embark must take the contract class name from the file name. If you’d prefer to change the name of your contract file to something else like contracts/simple_storage.vy, you’ll need to update config/contract.js to allow Embark to match a contract configuration to a contract file:

Please see the Embark smart contract configuration documentation for more information on how to configure contracts in Embark.

Now that we have installed and configured everything, let’s run Embark and watch the magic!

Assuming we kept the file name SimpleStorage.vy from step 4, we should see the following output in the console:

There are a few common issues you may experience when Embark attempts to compile and deploy your Vyper contracts.

Vyper is not installed on your machine

This means that the binary vyper cannot be found on your machine. If you’re running *nix, you can verify this by running:

And update it with the path to the directory containing the vyper binary using:

Step 6. Interact with your contract in Cockpit

Given that the Vyper contract has the same functionality as the SimpleStorage.sol that ships with the default Embark demo, we could still run the Demo application and view that its functionality works as expected. However, an even easier approach to interacting with our deployed Vyper contract is to use Cockpit.

In your browser, open Cockpit using the link provided in the console, ie http://localhost:55555?token=<token from console> NOTE: the token parameter is provided in the Embark console once Embark has finished building pipeline files. This token can be copied to the clipboard by typing token in the console command prompt.

At the bottom, you should see your SimpleStorage contract. Click the name of the contract to open the interaction view:

Expand the set method interaction by clicking the set header. Enter a value to set the storedData variable in the contract to, ie 999:

Then click “Send”. You should see the inputs and the resulting transaction hash: 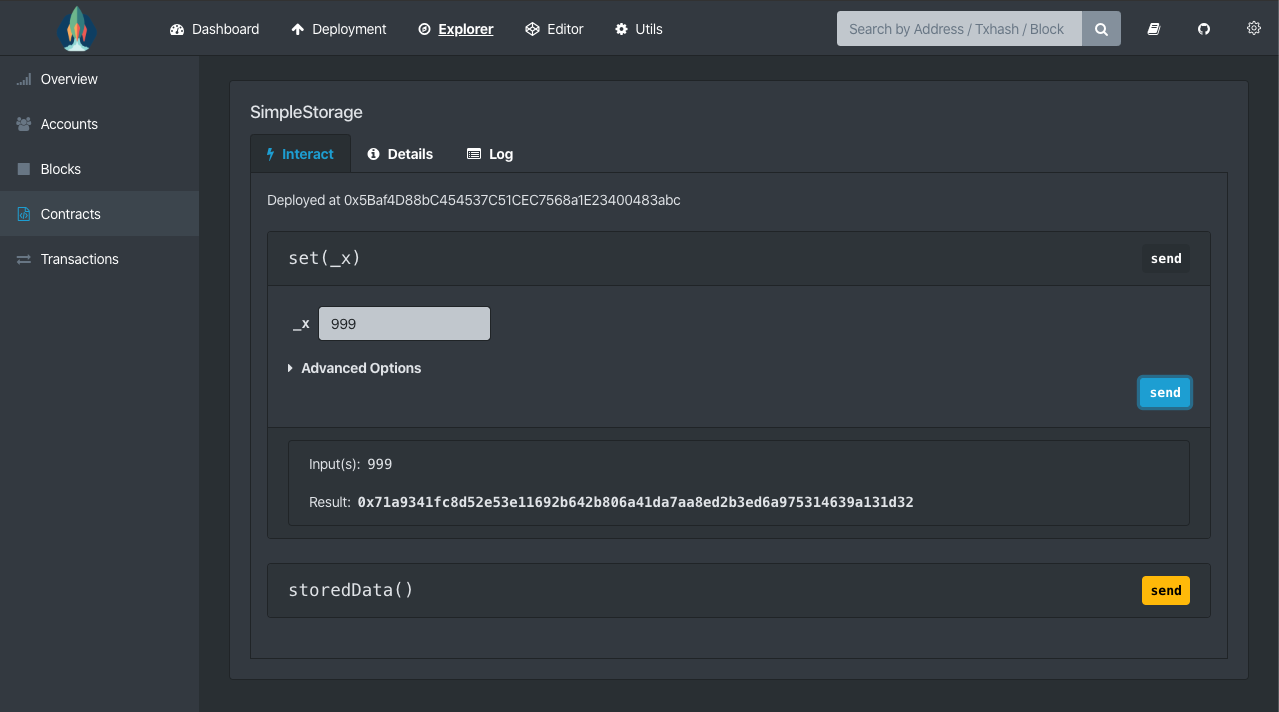 Additionally, you should see the transaction printed in Embark’s console:

Vyper is proving to be a useful language for writing secure smart contracts. While the latest security audit is looming, the EF is working on a Rust-based implementation that will hopefully propel Vyper towards its goals of being a security-centric, simplistic smart contract language.

In the meantime, we can use Embark to write and deploy our Vyper contracts using the Embark Vyper plugin.